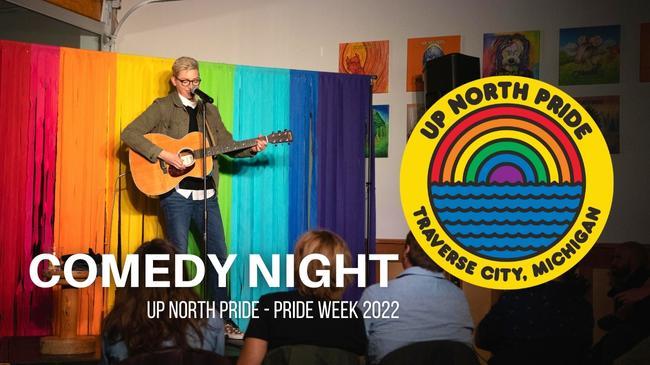 Following our sold-out Comedy Night in 2021, Up North Pride is proud to bring back the musical comedic brilliance of Kristin Key, and national touring LGBTQ+ comedians: Jeff D and Jen Kober! The show will run approximately 90 minutes and is sponsored by Lexa Ferrill Realtor. All ages are welcome - Parental Discretion is advised.

Kristin Key is an American comedian who has appeared at The Improv, and on the series Last Comic Standing and Bring the Funny. She favors a self-deprecating, physical, and improvisational style of comedy and incorporates the guitar to create original musical comedy.

Comedian Jeff D has brought houses down all over the country with his unique Southern-style humor, riotous stories, hilarious characters, and satiric point of view. Jeff D is an actor, writer, and has become a recognized face on the New Orleans famed performing arts scene. He takes his show to stages across the United States, appeared in the films Grudge Match and Joe Dirt 2, was featured on NPR's Bring Your Own New Orleans storytelling series, was named “Best of the Fest” at the Burbank Comedy Festival in 2018, and can currently be seen in The Platform on Hulu and Killing It on Peacock.

Jen Kober is originally from Lake Charles, LA, and has energetically bounded onto the national stage bringing crowds to their feet with her original blend of stand-up, storytelling, and improvised rock-n-roll comedy. Jen was the 2017 Winner of NPR's Snap Judgement Comedic Performance of the Year for her Girl Scout Cookie Caper story which went viral upon its release earlier that year. Kober received the 2018 Comedic Performance of the Year for her story titled Nana Vs. OJ. Jen has made appearances on notable TV shows like American Horror Story, Dead to Me, Curb Your Enthusiasm, and RuPaul’s sitcom AJ & The Queen.