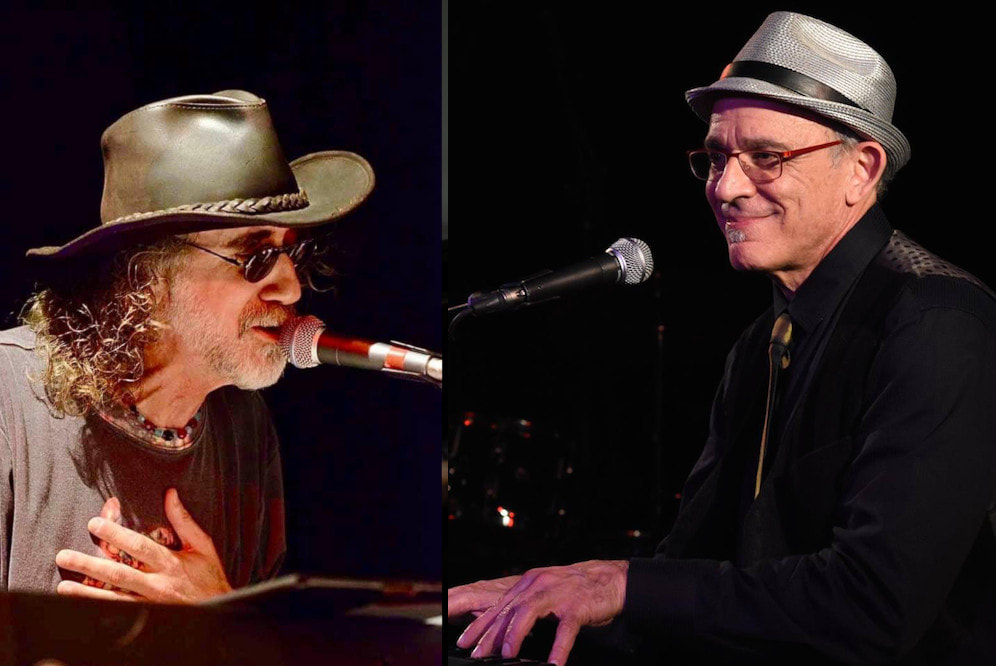 Two parallel musical paths; one a studio mainstay in NY, producing a handful of albums as well as hundreds of TV and radio “jingles,” the other broadly known as the composer behind so many of the NPR shows that have been woven into the American tapestry, those parallel paths of Kenny White and BJ Leiderman have now intersected. Both having grown up in front of the piano, they have decided to merge their talents and join forces at center stage. The concerts will be a triptych of songs, the stories behind them, and mutual piano prowess (with some guitar, too!). Kenny and BJ will perform solo and with each other, and will hope to provide through this musical odyssey the answer to, “What took them so long to get here?”

“Our theme music was composed by BJ LEIDERMAN” is a common refrain heard by public radio listeners across the United States. Born on Valentine’s Day in Norfolk, VA and now living in Asheville, NC, the awardwinning Leiderman has composed some of the best-known music themes on NPR. Over the years, many stories, voices, and sounds have come and gone on NPR radio, but there has remained one constant: the theme music. BJ Leiderman’s first theme was for the Morning Edition in 1979. Over the following decades, Leiderman composed some of the best-known music themes for other shows on NPR including Weekend Edition, Car Talk, Marketplace, Science Friday and Wait, Wait, Don’t Tell Me! The recent pandemic prevented touring on behalf of the album, but a chance hearing over new headsets of “The Other Shore” by Kenny White, reminded BJ of a Kenny White concert he had once attended in Asheville, and how much he, like Kenny, enjoys composing and performing solo on piano. The two musicians connected again, sparking the concept and collaboration for their “Piano/Piano” tour. “As you've heard me say week after week… our theme music is written by BJ Leiderman. He is the John Williams of public radio theme music.” - Scott Simon, Weekend Edition

Kenny White comes to the world of the touring singer-songwriter following a long and successful musical journey. White began his career in the 1970s, touring exclusively as keyboard player for Jonathan Edwards, and later with Livingston Taylor on Linda Ronstadt’s legendary “Living in the USA” tour. Throughout the 1980s and 1990s, he became a fixture in the NYC studio scene, producing and arranging hundreds of commercials for TV and radio, enabling him to work with artists as renowned and varied as Linda Ronstadt, Gladys Knight, Mavis Staples, Ricky Skaggs, and Aaron Neville. He contributed to many film soundtracks as writer/musician, and appears on dozens of recordings, including Marc Cohn’s platinum debut. White’s record producing credits include Shawn Colvin’s Grammy-nominated song, “I Don’t Know Why,” as well as the last four solo CDs for Peter Wolf, formerly with the J. Geils Band. White’s music has been discovered in the UK and Europe, where he tours annually in the spring, and was awarded the International Songwriting Award at the Premi Ciampi music festival in Livorno, Italy. And although he has all but given up his days as a sideman, in 2014 he accepted an offer by none other than Tom Jones to play in his “soul quartet” for a sold-out three-week US tour. Kenny often attracts an intriguing patronage to his concerts. Robert Plant was recently sighted in rapt attention at one of White’s solo shows in the UK and Jackson Browne, the same, at one of Kenny’s shows in Los Angeles. “Kenny White has earned a place among my favorite singer/songwriters… and particularly, lyricists. A true wordsmith AND musician he reveals a fine sense of humor, as well.” - David Crosby